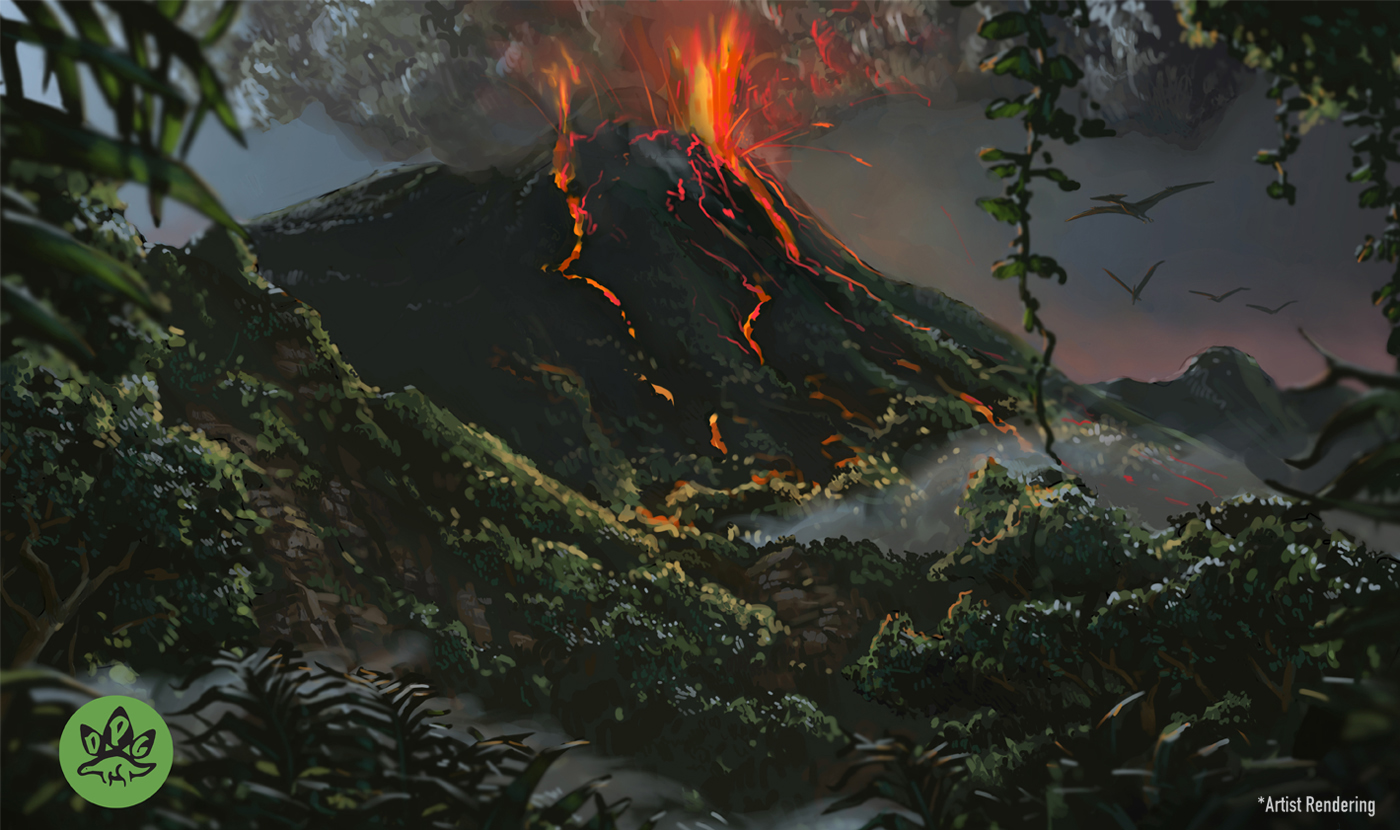 Mount Sibo (or as some of the InGen employees like to call it, “Mount Hammond”) is located toward the north end of the island and is building towards an inevitable eruption. With the impending event being the focus of most media coverage, many tend to overlook the devastating effects volcanic activity will have on the island in the days prior to the eruption.

Mount Sibo has been described by geologists as a “ticking time bomb,” but there are many less-visible threats that are already beginning to harm our ancient friends.

In this article, we will explain why it is vital that efforts to rescue Isla Nublar’s dinosaurs come sooner, rather than later.

Since Mount Sibo’s reactivation in 2017, seismic monitoring, remote observation, and careful analysis by the DPG and our associates at the Phillane Institute of Volcanology have been in effect to anticipate volcanic and geological events that threaten the stability of the island. Using this carefully collected and catalogued data, the eruption window for Mount Sibo has been narrowed down to between two days and two months away. Such an unprecedented level of accuracy allows us to summarize the risk and execute the evacuation plans that we have been working on with ecologists and researchers.

While our sole target here is to evacuate and relocate the dinosaurs, we must not overlook the other factors that threaten their well-being in the wake of the rapidly increasing volcanic activity. The natural environment of Isla Nublar has likely become heavily polluted with conditions worsening on a daily basis. An increase in acidity levels of water sources is the first major concern along with high levels of sulphur dioxide, as well as large quantities of carbon dioxide, saturating rivers and standing water. This volcanic outgassing from deep below the surface of Isla Nublar, as well as exposure to ashfall, will initially result in algal blooms that will starve water sources of oxygen. The populations of fish and other aquatic life will dwindle and vanish, effectively obliterating an entire section of the food chain that several dinosaur species have come to rely upon, including Suchomimus and Baryonyx.

In addition, contamination of hydrogen fluoride at higher elevations on Mount Sibo is a creeping threat to the ecosystems of the island’s southern lowlands. With rainstorms constantly travelling over the island, it is only a matter of time before groundwater contaminated with hydrogen fluoride is flushed into water sources in the more southern regions of the island, potentially causing a total collapse of the ecosystem and the demise of these animals before Mount Sibo even erupts.

Land-dwelling dinosaurs are also far from safe. Grazing animals are particularly susceptible to pulmonary exposure from volcanic ash on the surface of plant life, and ingestion of hydrogen fluoride can compound this damage, causing severe burns and irritation to the eyes, lungs and mucous membranes. This can lead to chronic illness, secondary infections, and ultimately death. The surrounding foothills of Mount Sibo is the favoured territory of Parasaurolophus, Pachycephalosaurus, and Microceratus, which is currently at the top of the critical exposure list.

We have to face the cold, hard facts presented to us: the very delicate existence these animals have made for themselves is becoming more hostile with each passing day and will be utterly destroyed by the inevitable volcanic eruption.

Their only chance for survival now rests in our hands, but time is running out. We need to evacuate this island as soon as possible, if the remaining population is to have any chance of survival. We need your help!

Support the DPG today. Share our message and help spread the word. You can even adopt your very own dinosaur by visiting AdoptADino.com. Help us save the dinosaurs before it’s too late.