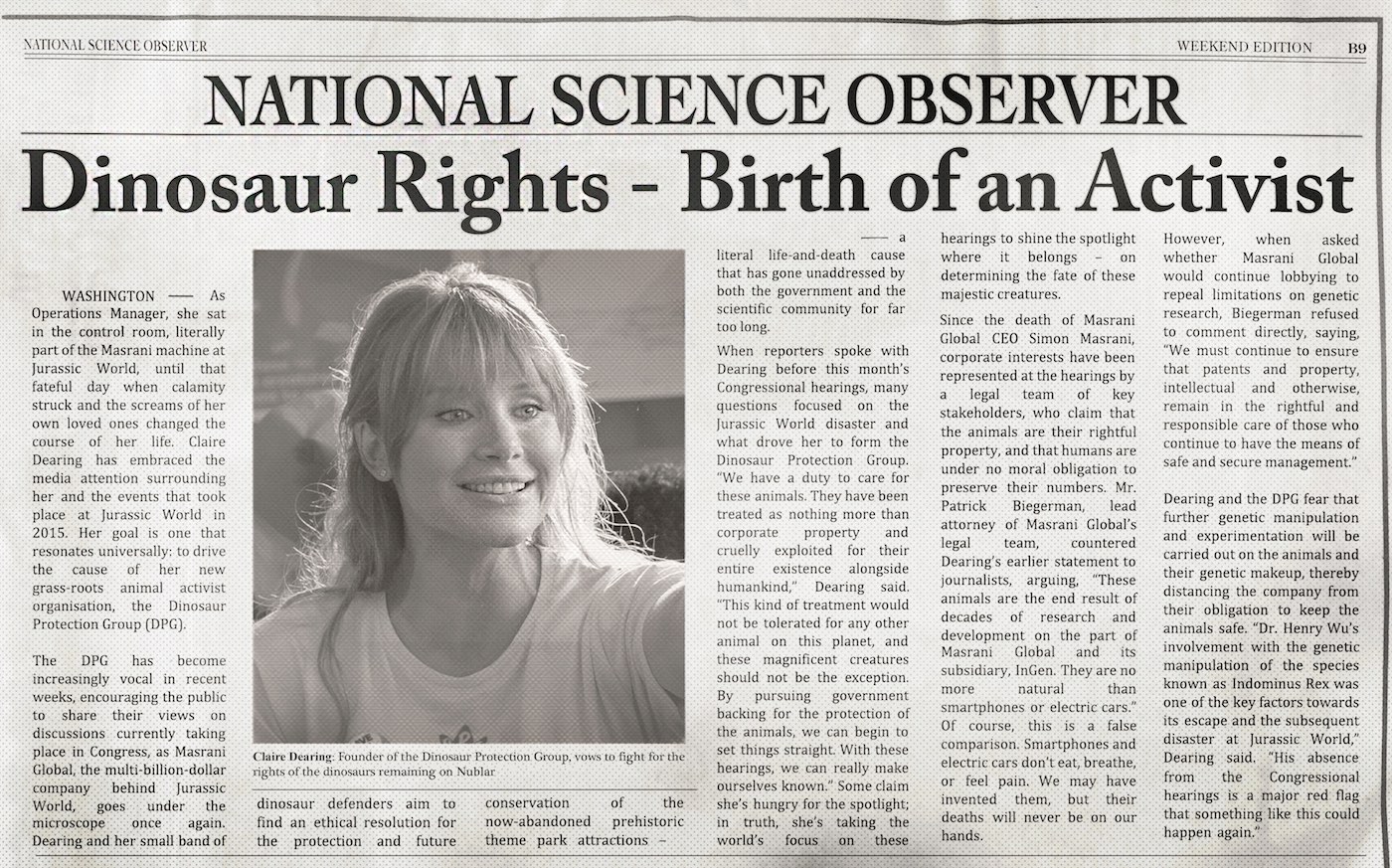 WASHINGTON - As Operations Manager, she sat in the control room, literally part of the Masrani machine at Jurassic World, until that fateful day when calamity struck and the screams of her own loved ones changed the course of her life. Claire Dearing has embraced the media attention surrounding her and the events that took place at Jurassic World in 2015. Her goal is one that resonates universally: to drive the cause of her new grass-roots animal activist organisation, the Dinosaur Protection Group (DPG).

The DPG has become increasingly vocal in recent weeks, encouraging the public to share their views on discussions currently taking place in Congress, as Masrani Global, the multi-billion-dollar company behind Jurassic World, goes under the microscope once again. Dearing and her small band of dinosaur defenders aim to find an ethical resolution for the protection and future conservation of the now-abandoned prehistoric theme park attractions – a literal life-and-death cause that has gone unaddressed by both the government and the scientific community for far too long.

When reporters spoke with Dearing before this month’s Congressional hearings, many questions focused on the Jurassic World disaster and what drove her to form the Dinosaur Protection Group. “We have a duty to care for these animals. They have been treated as nothing more than corporate property and cruelly exploited for their entire existence alongside humankind,” Dearing said. “This kind of treatment would not be tolerated for any other animal on this planet, and these magnificent creatures should not be the exception. By pursuing government backing for the protection of the animals, we can begin to set things straight. With these hearings, we can really make ourselves known.” Some claim she’s hungry for the spotlight; in truth, she’s taking the world’s focus on these hearings to shine the spotlight where it belongs – on determining the fate of these majestic creatures.

Since the death of Masrani Global CEO Simon Masrani, corporate interests have been represented at the hearings by a legal team of key stakeholders, who claim that the animals are their rightful property, and that humans are under no moral obligation to preserve their numbers. Mr. Patrick Biegerman, lead attorney of Masrani Global’s legal team, countered Dearing’s earlier statement to journalists, arguing, “These animals are the end result of decades of research and development on the part of Masrani Global and its subsidiary, InGen. They are no more natural than smartphones or electric cars.” Of course, this is a false comparison. Smartphones and electric cars don’t eat, breathe, or feel pain. We may have invented them, but their deaths will never be on our hands.

However, when asked whether Masrani Global would continue lobbying to repeal limitations on genetic research, Biegerman refused to comment directly, saying, “We must continue to ensure that patents and property, intellectual and otherwise, remain in the rightful and responsible care of those who continue to have the means of safe and secure management.”

Dearing and the DPG fear that further genetic manipulation and experimentation will be carried out on the animals and their genetic makeup, thereby distancing the company from their obligation to keep the animals safe. “Dr. Henry Wu’s involvement with the genetic manipulation of the species known as Indominus Rex was one of the key factors towards its escape and the subsequent disaster at Jurassic World,” Dearing said. “His absence from the Congressional hearings is a major red flag that something like this could happen again.” In fact, “could” feels like a mighty understatement considering how corporate control over dinosaurs for the last few decades has played out; corporations are built for profit, and greed has been proven to respect no ethical boundaries.

Dr. Henry Wu, recently stripped of all credentials after being found guilty of bio-ethical misconduct, could not be reached for comment. His absence comes at an inconvenient time for those debating the future of Isla Nublar. When asked if she considered Dr. Wu responsible for the deaths of several members of the public, Dearing said, “He abused his power and his position, and he must be held accountable for his actions.” Speaking at the hearing, Dr. J.R. Phillips of the National Committee for Medical and Health Research Ethics gave her view on the scientist’s actions leading up the tragedy: “It has been made abundantly clear that Dr. Wu had a total disregard for any kind of legislation that protects the public, abusing almost every limitation put in place on his research.”

Amid the controversy surrounding the public statements from both sides of the argument, wildlife protection groups have been inclined to focus less on dinosaurs and more on other, less prehistoric species. They strive to claim a passionate middle-ground; wildlife activist Mr. Ozwald Brook stated, “Creating artificial life forms that are dependent on us for their survival makes a mockery of the natural world. Besides the obvious risks to unaltered wildlife, these tremendous efforts and resources should be directed entirely toward existing endangered species such as the Black Rhinoceros and the Borneo Elephant, that have been systematically ignored in the debate.”

These sentiments were echoed by renowned animal conservationist Dr. Heather Sharpley. “We have brazenly introduced organisms into the world that are by their very nature, universally endangered and with that classification comes a set of expectations as to how they should be treated,” she said. “It is imperative to remember, however, that we still have animals on the brink of extinction without the safeguard of being insured as the property of investors and shareholders with a multi-million dollar legal team to protect them.” And yet, the dinosaurs are here, alive, on Isla Nublar. Since they’re not a product of the “natural world,” does it not make sense that a force outside the natural world – namely the DPG – is needed to ensure their rights are protected?

Dearing warned that Congress and the public will only have one chance to make the right choice when it comes to the dinosaurs. “We only get to make this decision once. We must ensure that when generations ahead of ours look back, they can see how each and every one of us rose to the challenge ahead,” she said. “Are we willing to stand by and allow these creatures to go unprotected from further harm? I hope not. Our history of interaction with these animals has shown that once created, they cannot be bribed, extorted or controlled. The only true control we have is in our choices – to either destroy life, or protect it.”

The Congressional hearings will continue as the investigations unfold. But the clock is ticking. Like Dearing, millions of others who haven’t been thrust into the spotlight of this battle can only hope that the government will make the right choice and protect the dinosaurs. Or must we wait for disaster to strike again to own up to our responsibilities?