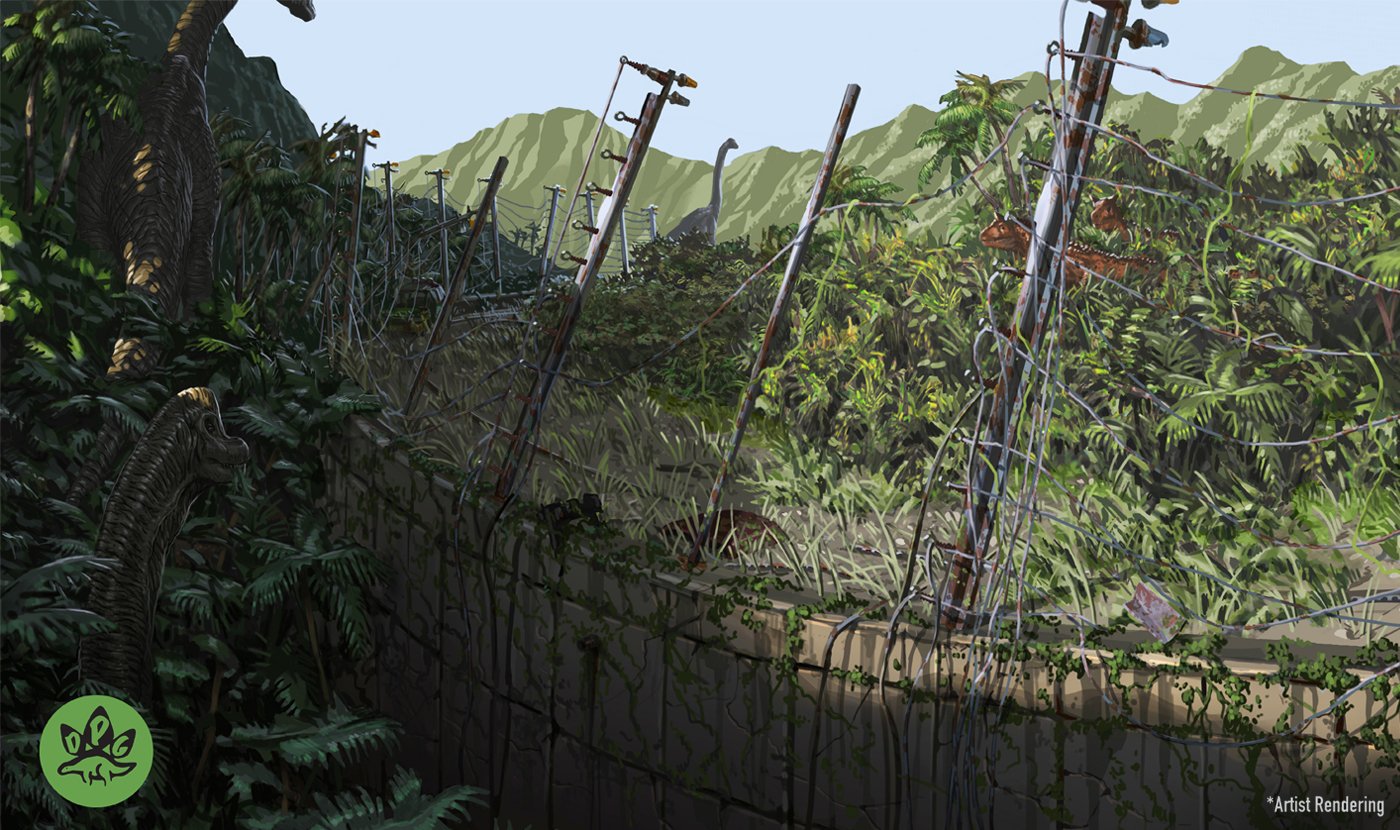 What caused the downfall of the original Jurassic Park? Greedy intentions and nefarious actions that destroyed a vision of creation. Here at the DPG, we believe that those who do not learn from history are doomed to repeat the same mistakes. With that in mind, we’ve investigated the 1993 incident, as well as InGen’s mission to control and cover up the facts surrounding it.

Information has been minimal, details have been deliberately skewed, and the public lied to...until now.

The controversial 1993 incident was swept under the rug by InGen during the initial years after its abandonment. The dinosaurs remaining on the island were left to fend for themselves, the families of the victims were supposedly given hush money, and all information surrounding the park was hidden.

What happened? In 1993, an InGen computer programmer named Dennis Nedry, was alleged to have deactivated Jurassic Park’s security systems in an act of sabotage, likely to steal dinosaur embryos to sell on the black market or to a rival company. This resulted in a catastrophe that not only destroyed the park and cost people their lives, but also exposed InGen’s embryonic library to the fallout of the parks abandonment.

Theories regarding the incident weren’t openly discussed until after a televised interview with Dr. Ian Malcolm in 1995, during which he famously disclosed sensitive information about the events of 1993. However, InGen undertook a dedicated effort to discredit Dr. Malcolm’s claims. The company’s interference came in the form of several published interviews with company representative Peter Ludlow. Ludlow, armed with years of experience in litigation, used a combination of legal loopholes, misinformation, and outright bribes in order to maintain a favorable reputation for the company. Out of a desire to preserve Costa Rica’s reputation as a safe tourist paradise, Costa Rican officials contributed to the cover-up as well, stating in print: “John Hammond and InGen’s work is filed under genetic research for an ecological preserve. There is no evidence or credibility to far-fetched claims of living dinosaurs.” Ultimately, the misdirection worked. The public became convinced that the eccentric mathematician was lying and that InGen was not responsible for any wrongdoing as a result of their genetics program. Jurassic Park was dismissed as a hoax and the public moved on.

Of course, the narrative that Ludlow had carefully constructed began to unravel in 1997, when the Tyrannosaurus was set loose in San Diego. This time the public demanded the truth about what was potentially roaming the islands owned by InGen. Still, it would be years before evidence surfaced that would disclose the true catalyst of the original tragedy.

[Details of the damage caused by the InGen employee and InGen’s abandonment of the island can be found within the recovered pages of InGen’s Dinosaur Information guide thanks to JUR@55!_H@K3R.] 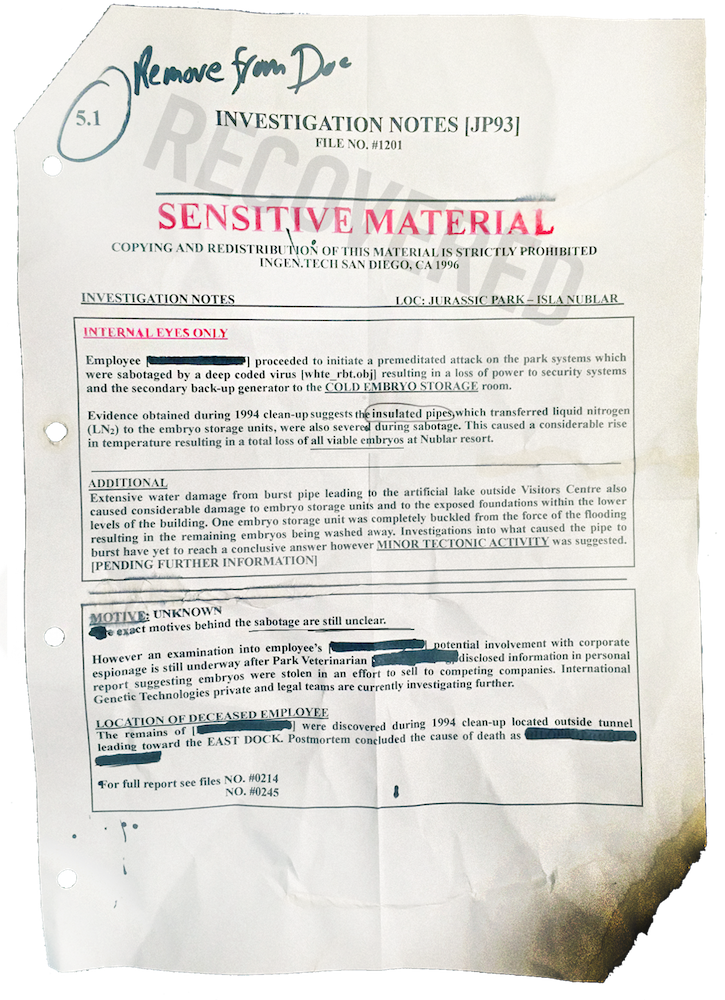 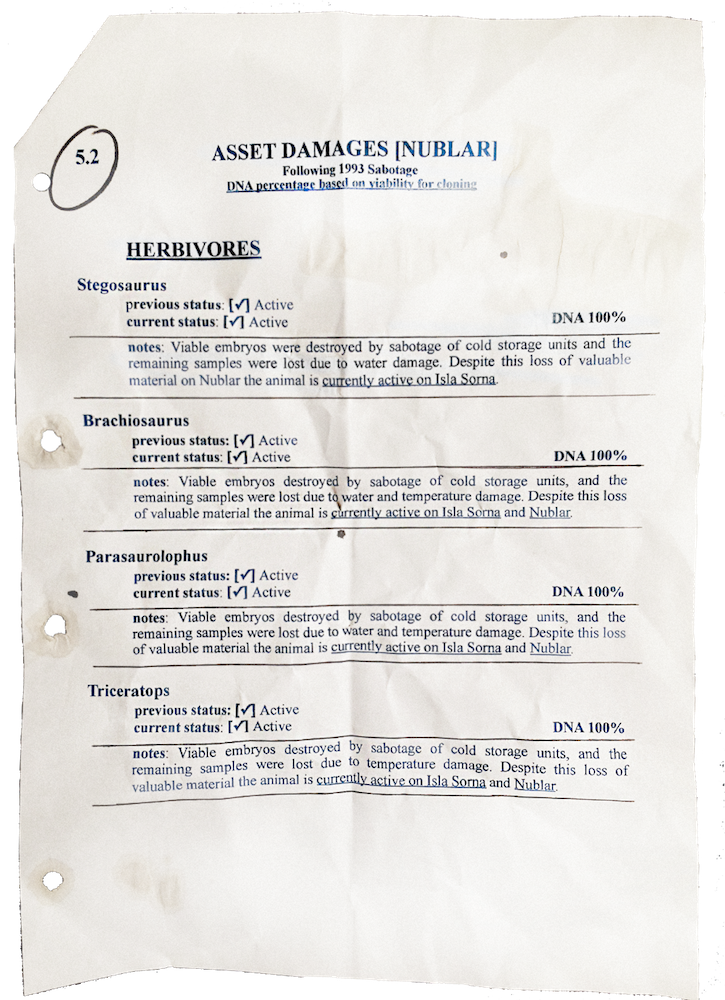 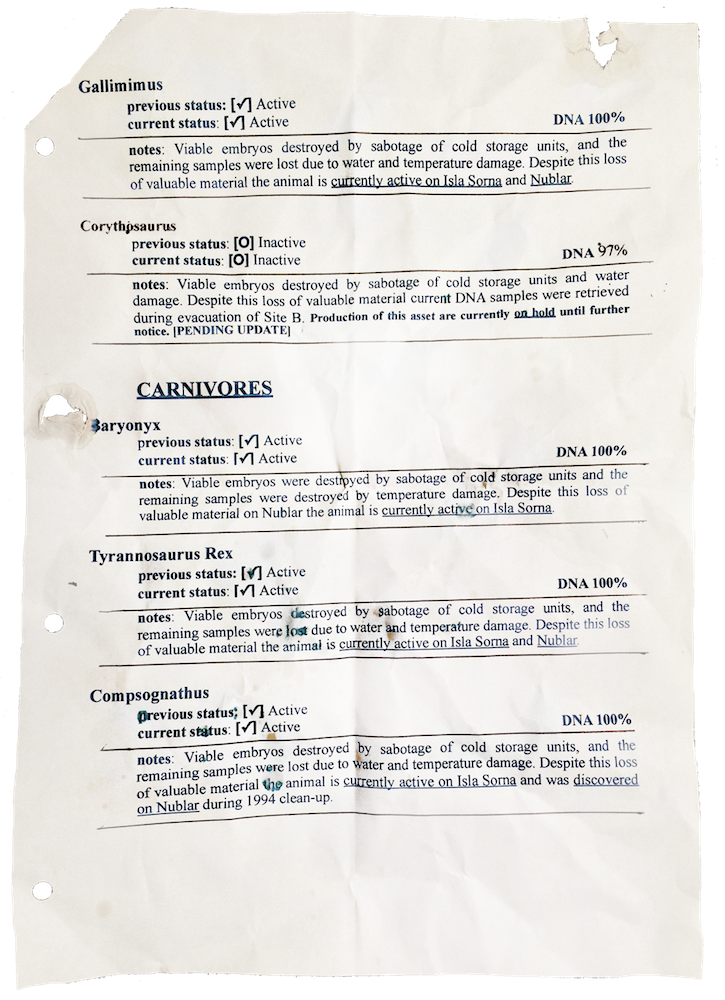 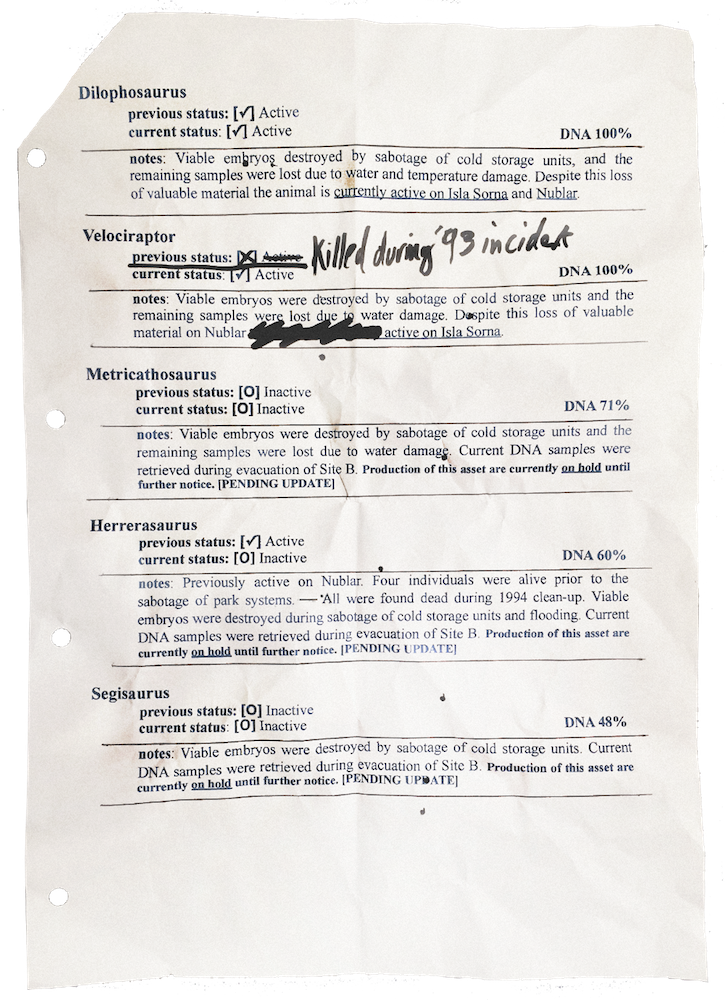 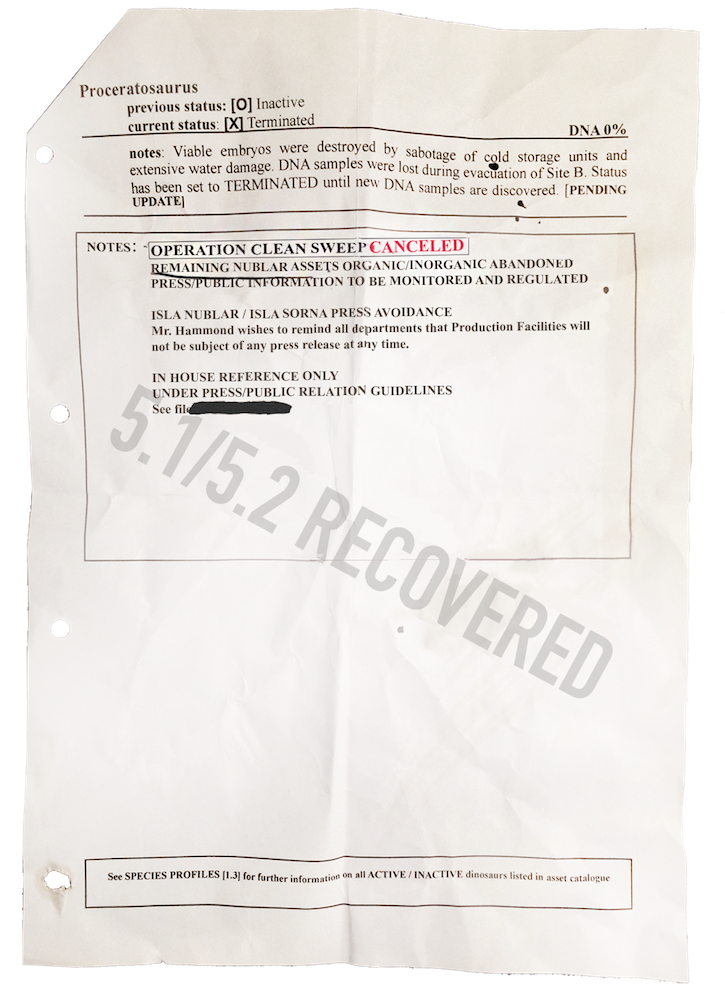 Jump forward to Masrani Global’s involvement. Let’s take a look at how they chose to handle the 1993 incident. Our founder has some fascinating inside information on how this fresh wave of misinformation was directed behind the scenes.

When they began constructing Jurassic World, Masrani Global sought to bury the specter of Jurassic Park. Employees of the company were sworn to keep the original resort out of the public eye. However, Simon Masrani decided to retain select elements of Hammond’s original vision, including the old Jurassic Park gate design and a whitewashed history of the previous incarnation of the park.

The company had considered having several other exhibits showcasing remnants of the old park, including a Gyrosphere tour past the Visitors’ Center; however, when Jurassic World turned out to be a smash hit upon its opening in 2005, Masrani Global felt that looking back would prove counter to their business model. Once again, the goal was profit and the remaining structures of the old park were placed into restricted areas or dismantled.

While evidence definitively proving the Jurassic Park saboteur was working on someone else's behalf remains thin, here at the DPG, we refuse to believe he worked alone. When the opportunity for great wealth is presented, great forces will mobilize. It might seem obvious to demand those responsible for these animals keep an eye on their employees, especially given the more recent events at Jurassic World; but who’s to keep an eye on the employers? If we are to maintain the well-being of these animals after saving them from Mount Sibo, and the safety of the world they inhabit, we must ensure those involved with their safety, including everyone at the DPG, are committed to speaking up at the first sign of betrayal of the public trust. This time knowledge must not be buried in fear, but wielded openly with power. After all, greed is timeless. Extinction doesn’t just rear its ugly head in the form of a volcano – it can come from the misguided motives of a single human. Or a covert scheme of larger forces pulling the strings.

It’s our world. These creatures are all our responsibility. So sign up today, and let’s save these dinosaurs!